How the Pomme Got Its Name 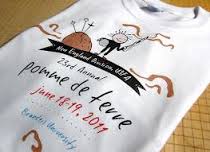 People often wonder why the Pomme is called the Pomme, and I am, frankly, proud to say I came up with the name. Here’s how it happened:

Back in the eighties, 15 fencers was considered a good turnout for a New England Division event. In those days there was no pre-registration, no internet posting of schedules, no paid referees, and far fewer fencers. Each season, the Division officers would get together, put together a competition schedule and assign a fencer to serve as the meet manager. Often a fencer wouldn’t know that they had been assigned to manage a meet until they received the division newsletter in the mail. That’s mail as in the US Postal Service mail. There was no way to know how many fencers would be at a competition until you walked in the door. These local events were designated in the most utilitarian manner: “Men’s Foil Open”, “Women’s Foil ‘C’” – none of the fancy names referencing holidays or local landmarks that you see today.

There were no ROCs back then but there were several large annual tournaments that drew competitors from across the northeast. New York had the Michel Alaux, Philadelphia had its Csiszar. The traditional start of the competitive season in those days involved a five hour drive up to Montreal for another large regional event -- the annual Terre des Hommes tournament held at the Claude Robillard sports center. We in New England were envious of these impressive named tournaments, and we frequently discussed creating one of our own. The big, unanswered question -- what would we call it?

And so it was that a group of fencers found ourselves at Amarin of Thailand, a restaurant in Newton Corner. We sat in the central pavilion, tired and hungry after a competition at the nearby Boston Fencing Club. It was when I read the ingredients for massaman curry that it all came together: chicken, peanuts, onion, carrots… potatoes.

We thought it was very funny, this play on the name of the big Canadian event. Clever enough that the next fall, when we put together the Division schedule, the Men’s Foil Open for November was listed as the “Pomme de Terre Men’s Foil Open”. And that was the extent of our marketing; a name on the schedule in the division newsletter that was mailed to our members.

The event was scheduled to be held at MIT, and I was tagged to be the meet manager. I went early to set up, hauling the division’s scoring equipment, the paperwork and cards and membership forms needed to run an event by hand. When I finally looked up to open registration, there were 60 some men’s foilists waiting in line. We had quadrupled the usual number of entries.

The rest, as they say, is history. Word spread, events were added, the tournament was moved from the fall to spring. It has become an annual tradition. Great organizers and meet managers like Jeff Altbush, David Blake, Linda and Al Merritt and a host of volunteers have made it one of the best-run events in the country.